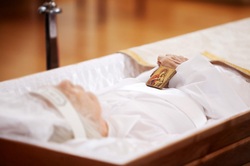 The death of a Christian not only affects the family, but also the entire Church, for we are all part of the Body of Christ. The Orthodox Funeral Service, which expresses this fact, is not to be seen primarily as an opportunity to extol, in a sentimental way, the virtues of an individual. Rather, the various prayers and hymns emphasize the harsh reality of death, as well as the victorious Resurrection of Christ through which the power of death is conquered. The Funeral Service comforts those who mourn; it is also the means through which the Church prays for one of its members who has died in the faith of Christ. Orthodoxy views the end of physical existence only as the termination of one stage of life. God's love is stronger than death, and the Resurrection of Christ bears witness to this power.

The Orthodox Funeral consists of three Services. First, there is a Vigil Service after death, which is usually conducted at the time of the wake. This service is called the Trisagion Service. The Church prays to Christ "to give rest with the Saints to the soul of Your servant where there is neither pain, grief, nor sighing but life everlasting." While the Church prays for the soul of the deceased, great respect is paid to the body. Orthodoxy believes the body of the Christian is sacred since it was the Temple of the Holy Spirit.

The body will share also in the final restoration of all creation. The Funeral Service is continued at the Church, where the body is brought on the day of burial. Ideally, the Divine Liturgy is celebrated. After the Funeral Service, the congregation offers its Farewell to the deceased. The Trisagion Service is repeated at the graveside


The death of a loved one is a traumatic time. It helps to know that the people of the church are praying for you and your loved ones.  It is often the case that families are not sure what to do, so if a family member is close to death, please inform the priest as soon as possible so that prayers, anointing, confession and communion may be offered.
If your loved one has already departed, please inform the funeral directors that the departed is an Orthodox Christian and that they need to seek specific guidance from the priest.

The prayer services of the church include:

•      Anointing, confession and communion for the dying

•      Prayers at the hour of death (preferably at the bedside)

The Church has no specific rules determining the length of time between death and the burial. Interment varies according to the climate, civil ordinances, customs, and circumstances, and may be held immediately following death, or after a number of days.

The hour of interment is also not fixed; it may be at any time during the day to accord with cemetery regulations and parish needs.

The Service for the Departed (panikhida) is sung on the eve of the burial whether the body is in the temple, funeral home, or elsewhere.

According to traditional practice, the casket is open from the first Service for the Department (panikhida) until the conclusion of the Funeral Service. The deceased is made in the image and likeness of God; the physical body is not to be shunned or rejected because it is in an altered state.

The Funeral Service and burial is generally not officiated on Sunday or Pascha. If the Funeral Service is scheduled for Monday, the body may be brought into the temple only after the service of Vespers on Sunday evening. There may, however, be circumstances for which immediate burial may be necessary.

Prayers for the dead are usually offered immediately after the burial at the memorial meal, on the third, ninth and fortieth day after death, and every year thereafter.

Saturday is the usual day for a memorial service. It can be scheduled immediately before the Vigil or Vesper Service. In this way, the prayers for forgiveness and repose preceding these services are illumined through the proclamation of the Lord’s Resurrection in the hymns that are sung in the following services.

However, the Service for the Departed (panikhida) may be served after the Sunday Divine Liturgy if the hierarch has given his blessing for this to take place at that time.

The Church has set aside definite days on which remembrance of the dead should take place. Among these are Meatfare Saturday, the second, third and fourth Saturdays of the Great Fast, the Saturday preceding Pentecost, and St. Demetrius Saturday.

In addition to these specific times, the faithful may have the names of the deceased remembered at the Proskomede and during the Divine Liturgy.

Memorial services are not permitted on feast days or from the Nativity of our Lord to Theophany, and from Palm Sunday to the Sunday of St. Thomas.

Many Orthodox Christians in the UK have family members who are not Orthodox.  The burial service of such a person is a Service for the Departed (panikhida), including scripture readings for the dead.

The priest is required to obtain his bishop’s blessing for bury a non-Orthodox person, so please inform the priest as soon as possible

The act of suicide is a profound tragedy affecting a parish. It necessitates prayers for forgiveness for the sake of the departed and exhorts the members of the parish community to repentance and sorrow.

The Orthodox Church cannot normally provide a Church burial to a person who has committed suicide. However, factors bearing on the particular case may become known to the priest who must share this information with the diocesan hierarch; the hierarch will consider the factors and make the decision concerning Funeral Services.

The practice of cremation is not a Christian one and is to be discouraged. Cremated remains are not to be brought into the temple for a burial service or for any other reason.

Although cremation is not encouraged, and the Funeral Service over cremated remains is not possible, the remains may be buried only with the hymn Holy God.

Unless there is a specific legal reason, such as determining the cause of death, an autopsy ought to be avoided. The desire for scientific information through experimentation is not enough reason to merit an autopsy. Nevertheless, this is a decision that the family itself must make. The Church is concerned that respect for the body as a temple of the Holy Spirit be maintained.

Donation of body organ(s) after death may be allowed as long as respectful care is exercised toward the body before, during, and after the extraction operation. Care must be taken that the organ(s) are given as a gesture of altruism, free of any commercial overtones.

The Church does not consider the sharing of organs as a lessening of the presence of the Holy Spirit in the deceased, or as a transmigration of part of the donor to the recipient. A healthy person not in expectation of imminent death may donate non-vital organs as long as his/her quality and integrity of life is not diminished or endangered.

Traditional dates for funerals and memorials

Traditionally, in addition to the service on the day of death, the memorial service is performed at the request of the relatives of an individual departed person on the following occasions:

It is also served on the numerous Soul Saturdays throughout the year. On these days, not only is the memorial service served, but there are also special propers at Vespers, Matins, and the Divine Liturgy. These days of general memorials are:

•      Meatfare Saturday (two Saturdays before Great Lent begins)—in some traditions families and friends will offer Panikhidas for their loved ones during the preceding week, culminating in the general commemoration on Saturday

•      The second Saturday of Great Lent

•      The fourth Saturday of Great Lent

The Saturday before Pentecost—in some traditions families and friends will offer Panikhidas for their loved ones during the preceding week, culminating in the general commemoration on Saturday

Demetrius Saturday (the Saturday closest to the feast of Saint Demetrius, October 26)

Because of the great solemnity of the days, the celebration of memorial services is forbidden from Holy Thursday through Bright Week, and on all Sundays throughout the year.

There is no fee for the Sacrament. The parish priest is a volunteer and does not receive payment for the sacraments. Nevertheless, the parish does need income to contribute to the costs of running the church- maintenance, heating, lighting , candles etc.  Additional fees may be required for to pay for a choir to sing. If the deceased is, or immediate family are, Subscribing Members of St Anne’s then there is no fee. Non-members will be required to either become Subscribing Members or offer a gift of £250. If you are unable to offer this, please speak to the priest. The fees of the funeral directors are separate from these arrangements