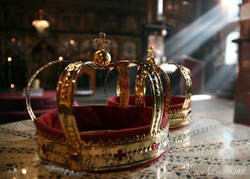 
The Church’s concern is for each person’s salvation, and therefore does not desire to place an insurmountable obstacle before her faithful by denying the Sacrament of Marriage to those who seek an inter-Christian marriage.


Before requesting permission from his Bishop to celebrate the marriage, the Priest must verify that:
•      They have been validly and legally married in a civil ceremony prior to the Orthodox marriage blessings

•      neither of the parties in question are already married to other persons, either in this country or elsewhere;

•      the parties in question are not related to each other to a degree that would constitute an impediment;

•      if either or both parties are widowed, they have presented the death certificate(s) of the deceased spouse(s);

•      if either or both of the parties have been previously married in the Orthodox Church, they have obtained ecclesiastical as well as civil divorce(s);

•      the party or parties who are members of a parish other than the one in which the marriage is to be celebrated have provided a certificate declaring them to be members in good standing with that parish for the current year;

No person may marry more than three times in the Church, with permission for a third marriage granted only with extreme oikonomia. In cases involving the marriage of Orthodox and non-Orthodox Christians, the latter must have been baptized, in water, in the Name of the Father and the Son and the Holy Spirit. The Church cannot bless the marriage of an Orthodox Christian to a non-Christian. The Sponsor must provide a current certificate of membership proving him or her to be an Orthodox Christian in good standing with the Church, or be a subscribing member of St Anne’s.

A person who does not belong to an Orthodox parish, or who, if married, has not had his or her marriage blessed by the Orthodox Church, or, if divorced, has not received an ecclesiastical divorce, cannot be a sponsor.

The following types of relationships constitute impediments to marriage:

•      Uncles and aunts with nieces and nephews;

•      First and Second cousins with each other;

The sponsor is an ecclesiastical witness, the person who, in many instances but not always, is given the privilege of baptizing (as Godparent) the couple’s first child. He/she is also the person that the couple turns to for advice and counsel in their lives if time and circumstance are conducive to such support. The couple may wish to have in their wedding party both a sponsor and a best man/maid of honor, or they may be the same person. While the role of the best man/maid of honor is that of a witness, the role of the sponsor is an active one. He/she exchanges the rings and the crowns and holds the ribbon as the couple processes around the ceremonial table together as husband and wife. Traditionally, the sponsor purchases the wedding crowns, the candles, etc. used during the ceremony.

If the sponsor is from another parish, he/she must bring a letter of introduction from his/her Priest.

Marriage is a solemn vow to the other person, before God. Preparation must be made before such a commitment. It is expected that the couple to be married, and (preferably) the sponsor, attend marriage preparation meetings before the marriage. One should be prepared for these classes to take 3-6 months of preparation. Marriages should not be expected to be celebrated without an agreed period of preparation and prayer.

There is no fee for the Sacrament. The parish priest is a volunteer and does not receive payment for the sacraments. Nevertheless, the parish does need income to contribute to the costs of running the church- maintenance, heating, lighting , candles etc.  Additional fees may be required for to pay for a choir to sing. If one of the couple getting married is a Subscribing Member of St Anne’s then there is no fee. Non-members will be required to either become Subscribing Members or offer a gift of £250. If you are unable to offer this, please speak to the priest. Fees for flowers and reception etc are separate to these arrangements.

Days when weddings are not permitted

In the Orthodox Church, the Sacrament of Marriage is not celebrated on fast days or during fasting seasons of the Orthodox Church. These include: during Great Lent and Holy Week, August 1-15, August 29 (Beheading of St. John the Baptist), September 14 (Exaltation of the Holy Cross), and December 13-25. Nor are marriages celebrated on the day before and the day of a Great Feast of the Lord, including Christmas (December 24 and 25); Epiphany (January 5 and 6); The Presentation of Christ to the Temple (February 1 and 2). Marriages are also not celebrated during the moveable Feasts of Easter, Ascension, and Pentecost or on the day before these Feasts. The Sacrament of Holy Matrimony can be celebrated on the above dates only in an extreme emergency and by dispensation of the Archbishop.