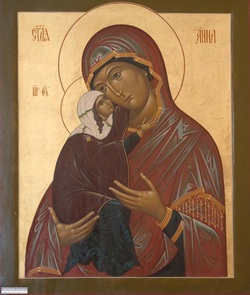 Troparion of St Anna Tone 4
O godly, ever-blessed Anna,/ thou didst bear the pure Mother of God who conceived Him Who is our life./ Thou hast now passed to heaven/ and art rejoicing in glory,/ asking forgiveness for those who faithfully honour thee.

Kontakion of St Anna Tone 2
We celebrate the memory of the ancestors of Christ/ and faithfully ask their help;/ that all may be delivered from every affliction who cry:/ Be with us, O God, for it pleased Thee to glorify them.


St. Anna was the daughter of Matthan the priest, of the tribe of Levi as was Aaron the High Priest. Matthan had three daughters: Mary, Zoia, and Anna. Mary was married in Bethlehem and bore Salome; Zoia was also married in Bethlehem and bore Elizabeth, the mother of St. John the Forerunner; and Anna was married in Nazareth to Joachim, and in old age gave birth to the Theotokos. St. Joachim was of the tribe of Judah, and a descendant of King David.

Sts. Joachim and Anna had been married for fifty years, and were barren. They lived devoutly and quietly, using only a third of their income for themselves and giving a third to the poor and a third to the Temple. Joachim had done this since he was 15-years-old, and God multiplied his flocks, so the couple was well provided for. They longed for a child but remained childless into their old age. When they were in Jerusalem to offer sacrifice to God, the High Priest, Issachar, upbraided Joachim, "You are not worthy to offer sacrifice with those childless hands." Others who had children jostled Joachim, thrusting him back as unworthy. In despair, he consulted the geneological records of the tribes of Israel and discovered every righteous man in the nation had been blessed with children, except him. This caused the aged saint great grief, and he and his wife left with heavy hearts. Then the two of them gave themselves to prayer to God that He would work in them the wonder that He had worked in Abraham and Sarah, and give them a child to comfort their old age.

St. Joachim took his flocks and went to a high mountain, refusing to return home in shame. Meanwhile, St. Anna prayed in her garden. God sent the Archangel Gabriel to each of them, who gave them tidings of the birth of "a daughter most blessed, by whom all the nations of the earth will be blessed, and through whom will come the salvation of the world." Each promised to have their child raised in the Temple as a holy vessel of God. The archangel told St. Joachim to return home, where he would find his wife waiting for him in the city gate. St. Anna he told to wait at the gate. When they saw one another, they embraced, and this image is the traditional icon of their feast.

St. Anna conceived shortly thereafter, and in the ninth month gave birth to the Blessed Virgin Mary. This Conception of the Most Holy Mother of God is celebrated by the Church on December 9 and the Nativity of the Theotokos is celebrated on September 8.

Sts. Joachim and Anna took Mary, at the age of three, to the temple to be dedicated to the service of the Lord, and presented her to the priest Zechariahs. The parents then, after offering up her sacrifice (according to the custom of the time), left the Virgin with other maidens in the apartments of the temple to be brought up therein. The Church commemorates the Presentation of the Theotokos on November 21